Is this article is true is would appear that the problems within PCANZ around its social witness are shared by the its large North American cousin, PCUSA:

http://rcm.amazon.com/e/cm?t=r06c-20&o=1&p=8&l=as1&asins=1856075621&fc1=000000&IS2=1&lt1=_blank&lc1=0000FF&bc1=000000&bg1=FFFFFF&f=ifr&npa=1Over the weekend I read Climate Change: The Challenge to All of Us by Sean McDonagh. Theological treatments of the issue of climate change are rare so I was pleased to pick this up (with 20% discount too). Unfortunately I cannot recommend this book. It was clearly put together in haste – perhaps in the rush to capitalize on the soaring public interest. One gripe is the over reliance on newspaper articles as sources. One could just as easily read the papers oneself or subscribe to a decent RSS feed on climate change for news about new research into the science and likely impacts of climate change. The footnoting is terrible in places and the number of spelling mistakes is unforgivable. While the book is directed at us all it is really for the Irish and especially Irish Catholics. If you aren’t one, don’t bother.

I sampled this cheese in Melbourne this weekend: 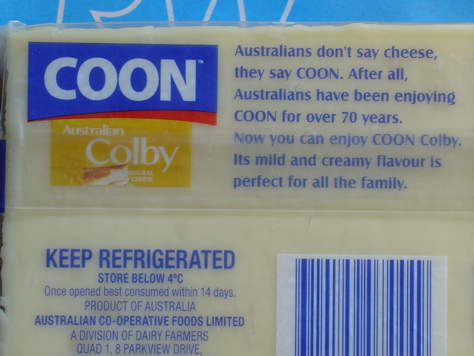 This was a tasty cumin cheese from the Farmer’s Market in Dunedin:

My friend Rob sent me this email:

Here’s a selection of quotes I’ve culled from the most recent issue of the AA’s “Advocate” magazine. It will give you a small taste of what New Zealand’s beloved automobile institution stands for on:

1. Mining in National Parks
“GNS Science has conservatively estimated that NZ has at least $86 billion worth of mineral resources in known and undiscovered deposits…The problem: most of these minerals are in our National Parks and we don’t want to dig them up. Why not? It doesn’t stop the Australians.”

2. Value of Time Figures
“”It’s often disparagingly called ‘our love affair with the automobile’ but what this bit of environmental monocularism fails to appreciate is the value of the automobile in the ‘love economy.’ …How many telephone conversations with grandma equate to having a nice cup of tea with her? And should we price road use so that we make more phone calls and have fewer cups of tea? What are the implications of putting environmental concerns ahead of social and mental health ones?”

“While the car has been accused of creating ‘community severance’ by breaking up the neighbourhood village the car also brings people together again.”

“The role of the car in the wedding ceremony demonstrates its symbolic integration into our love lives. Not too many brides would accept a ‘bicycle built for two’ substitute.”

“When someone needs a hug it’s not a time to lecture them on global warming. A car connects one place with another more directly and efficiently without the frustration of making multiple connections, waiting for buses which are late or finding change which shopkeepers won’t give. Cars make connections between people easier than any other form of transport.”

3. The Recent Demonisation of Private Motor Vehicles
“Perhaps it’s time we started looking for more deserving icons of pollution than the family car…Take cows for instance…New Zealand’s 2.2 million private cars only account for less than 8% of our total Greenhouse gas emissions. Or put another way, 92% of NZ’s greenhouse gas emissions come from other sources.”

4 Public Transport Funding
“Back in New Zealand 90% of the population don’t use public transport, nor do they intend to. Even in Wellington with the highest PT share in the country the commuter share is only 23%–leaving 77% to other modes. And commuting is declining in its share of total trips. Do we want to spend 50% of our transport funds on 10% of the trips?”

FYI: State Insurance run a roadside assistance service and are not actively involved in political advocacy in the transport sector.